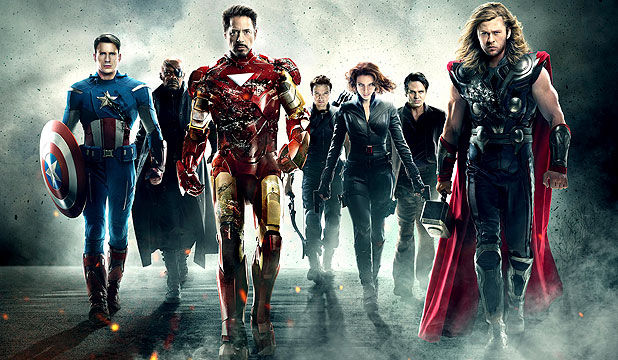 This week’s Marvel blog-a-thon movies are “Captain America: The First Avenger,” Marvel’s final Phase 1 origin film, and “The Avengers,” Marvel’s team-up mega-hit. By now I’m sure I’m starting to sound like a broken record in my reviews 😉 but re-watching these movies has been a lot of fun and has reminded me how much I love them. Even the movies that rank lower on my list at least contribute something to the Marvel Cinematic Universe.

Captain America ties with Black Widow for my second favorite Avenger superhero, and his origin film is another solid entry in the Marvel franchise. Chris Evans does a great job in what could have been a tricky role. The Cap’s sincerity and squeaky-clean character could have easily come across as too earnest, but Evans gives him enough authenticity and heart to make us empathize with him. I like how Steve Rogers starts out as an underdog; he’s not a wealthy bad boy like Tony Stark or a strong superhuman like Thor. Even when he does gain superpowers, he doesn’t lose sight of his humanity — or humility.

I also love that this movie is set during World War II. I think it really helps with the authenticity of the character; we get to see Captain America in his own time, in an era where patriotism was more clear-cut and the enemy was more easily identified. It also makes the Cap’s eventual accident all the more heartbreaking: he’s frozen in ice for decades and wakes up to find that his friends, the woman he loves and the world he knew are all gone. The Cap is such an interesting character in “The Avengers” and his sequel, “The Winter Solider,” because he’s a man out of time, and there’s an aura of sadness his character can’t quite escape.

There’s plenty of great moments in this movie: Tommy Lee Jones is terrific as a no-nonsense Army colonel, and it’s fun seeing Dominic Cooper as a young Howard Stark, Tony Stark’s father (Tony’s a lot more like his father than he’d probably care to admit). Another character I liked was Agent Peggy Carter, played by Hayley Atwell. I know Hollywood still has a ways to go in terms of its portrayal of women in films (especially action films), and we still haven’t gotten a solo female superhero movie from Marvel. However, I do appreciate that the female characters in the MCU are portrayed as competent and interesting, and they aren’t just helpless love interests needing to be saved by the main (male) superhero. Pepper Potts from “Iron Man” is fully capable of running Stark Industries, Jane Foster from “Thor” is a scientist, and Agent Carter has a position of command in the military.

While there’s definitely a lot to love about “Captain America: The First Avenger” and I enjoyed it even more this time than the last time I watched it, I don’t think it will overtake “Thor” on the final ranking of movies. It’s hard to top Loki as a villain, and while I think the Red Skull was the right choice for this story, the scriptwriters made him a little too over the top. I also feel Thor’s script was just a tad stronger. However, the Cap definitely beats Thor for best sequel, so I guess they’re even in the end. 😉

“Star Wars: The Empire Strikes Back” may be my all-time favorite movie, and “Iron Man” (at least for now) may be my favorite Marvel film, but “The Avengers” is actually my favorite memory of watching a movie in the theater. I talked a group of friends into going with me to see this on opening night back in 2012. They teased me for suggesting we buy our tickets weeks ahead of time, but later on we were really glad we did. The movie was already sold out by the time we got to the theater, and at one hour to show time the line of people who had already purchased their tickets but were waiting to see the movie was so long it had wrapped all the way around the inside of the theater and was looping back around again. The crowd was pumped, and this was the first movie I’d ever been to where people actually clapped and cheered during the film (I’m pretty sure the Hulk’s famous “Loki smash” scene even got a standing ovation). It was just a special moment with friends and fellow Marvel fans, and it was worth every penny we’d splurged on to see it in IMAX.

“The Avengers” is the culmination of arguably one of the best-executed marketing campaigns in Hollywood history. Marvel took a big risk by releasing smaller, origin story films first about these characters, who did not have the same notoriety as Batman or Superman. But people were willing to pay to see these movies, thanks to fun scripts, good actors and the excitement that these films were all connected. When we finally did get to see all the superheroes team up, it was exhilarating. Marvel had absolutely earned that moment.

What I love about “The Avengers” is that despite the fact we have six main characters, the film doesn’t feel too cluttered. Each character gets a moment to shine. There are so many quotable lines and memorable moments, from the Cap’s command, “Hulk, smash!” to Thor’s muttered comment about his brother Loki’s rampage, “He’s adopted.” I liked Tony Stark and Bruce Banner’s unexpected friendship, and it’s great finally seeing Nick Fury in action.

I feel like “The Avengers” should rate a little higher on my scale than No. 4, but I just can’t bear to bump the three above it — “Captain America: The Winter Soldier,” “Guardians of the Galaxy” and “Iron Man” — any lower. I think what happened is, “The Avengers” is very much an event movie. It was a movie you had to see opening weekend, on the biggest screen possible, with a bunch of fans who were as crazy excited as you were. While the film is certainly enjoyable each time I watch it, I just can’t quite recapture the magic of seeing it for the first time. That being said, it’s still one of the best in the Marvel Cinematic Universe, and it will always be one of my favorite superhero films.

6 thoughts on “Marvel Blog-a-thon Week 3: ‘Captain America: The First Avenger’ and ‘The Avengers’”