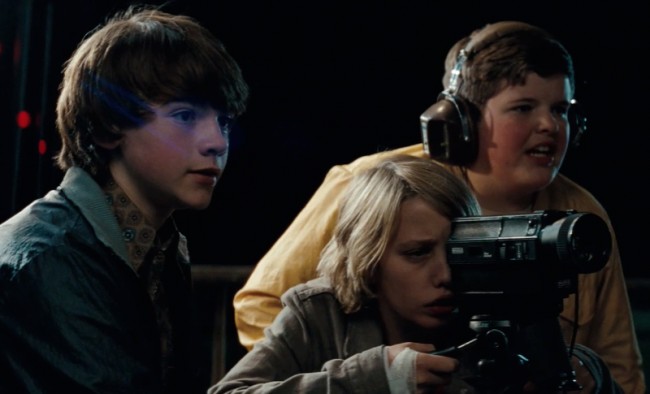 I’m not sure how I missed seeing “Super 8” when it was in theaters this summer, and now I’m really sorry I did. The movie was released on DVD this week, and it’s definitely a film I’d recommend watching.

The basic plot of the story involves a group of kids who decide to make a zombie movie one summer in the small town where they live, using a “Super 8” camera (hence the film’s title). They’re filming a scene at a train station one night when they witness a horrific and fiery train crash that just might have been caused by something extra-terrestrial. It’s not long before the military arrives on scene, and though they claim nothing suspicious has happened, the townspeople soon begin witnessing strange phenomena, such as dogs running away for no reason, vanishing equipment, and an increasing number of missing people. It’s the group of young would-be film makers who eventually put the pieces together, and they end up saving more than just the town.

It’s difficult to write a review of this movie without including spoilers. I want to describe the plot details that made this movie so great, but to truly experience the magic of the film, you just have to watch it unfold for yourself; to give away too much of the story ahead of time would detract from its sense of wonder.

And “wonder” is perhaps the best word to sum up this movie. It’s written and directed by J.J. Abrams and produced by Steven Spielberg, but even if you don’t watch the credits, you could probably guess this just by watching the film. “Super 8” pays homage to classic Spielberg films like “E.T.” and conveys a childlike sense of wonder about the world. There’s a look of pure joy on the young characters faces while they are filming their own Super 8 movie, and I imagine it’s probably not unlike the feeling Spielberg gets as he stands behind the camera.

Spielberg has long been one of my favorite directors because of his great sense of imagination and his willingness to “dream big.” His movies are fun to watch, but they also mean something, and “Super 8” is no exception to that. Abrams fits right in with this philosophy, adding in some of his own touches (including those trademark lens flares). 😉

Spielberg and Abrams have selected a great young cast, and it’s hard not to wonder if maybe the characters in this film bear any resemblance to Abrams and Spielberg as kids, who were undoubtedly experimenting with movie making at a young age.

There’s the “director” Charles, who leaves no question he’s the one in charge and it’s his creative vision the young film makers are going to be following; Cary, whose love of using fireworks to create special effects gets him into all kinds of trouble; Martin, who plays the “lead actor” but is prone to panic attacks; and Alice, who acts tough to hide the pain of having a father who isn’t there for her.

And caught at the center of it all is Joe. He’s the quiet one, his wishes often eclipsed by his more confident and outspoken friend Charles. He secretly loves Alice, struggles to relate to his father, and grieves for the recent death of his mother. Joe’s journey is the heart of the film, and he eventually becomes the hero. I won’t give away how he saves the town, but it’s a very “Spielberg” moment, and gives the movie a perfect ending.

As one of my coworkers said, “‘Super 8’ was pretty super,” and it’s one of my favorite movies this year. And make sure you stick around for the credits: the kids Super 8 zombie movie is played in its entirety. 🙂